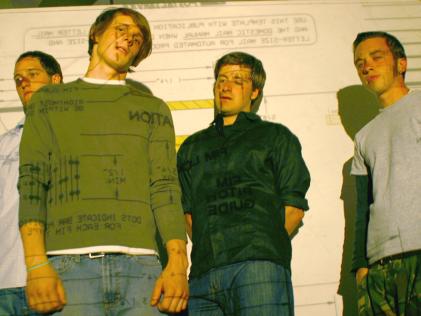 They say that variety is the spice of life. If that’s the case, Anadivine’s diverse compositions may be among the most delectable selections available. Over the past few years, Kingston, New York’s Anadivine has reeled in a vast array of sounds. From double-time melodic punk hustles, to gentle indie rock ballads, Anadivine lands on all fours every time.

Scan through The Militia Group full-length Zoo and you’ll notice that Anadivine is a cohesive mixture of versatile musicians. Songs like “Fountain Imperfection” show a fluid foursome at work, while “This Accident Worked Too Well” showcases the act’s more formidable moments.

Anadivine played their earliest shows on bills with numerous bands from the Northeast region of the U.S. and quickly bonded with bands like Coheed And Cambria, Midtown, Autopilot Off and Matchbook Romance. Anadivine’s drummer, Justin Meyer recalls, “We kind of helped each other out, since we were both from the same area.” Claudio, of Coheed and Cambria, stepped in the vocal booth on the band’s EP and laid down a few lines for the record. Through a mutual friend, Anadivine’s demos ended up at The Militia Group offices. Militia’s partner label, SideCho Records, released the band’s debut EP in 2003 which has already scanned several thousand units. “It’s very exciting to think that so many people went to a store and bought our CD,” Meyer says. “It’s been very cool.”

Shortly thereafter, the band began work on Zoo, devising an intensive writing schedule to meet their deadline. “We started in early November and worked until early January. We set a schedule up of Monday through Thursday to just write, and we had the weekends off to work on our parts and develop things on our own,” Meyer says. Next, Anadivine headed into the studio with producers Michael Birnbaum and Chris Bittner, best known for working with Coheed and Cambria. In the end, indie rock veteran Ed Rose mixed the completed tracks. “He added a very natural sound to it,” Meyer notes.

So what role does Anadivine play on the Militia Group roster? Simple ? it’s the case of being a bridge amongst the label’s releases, past and present. For those worried that Anadivine is spreading itself too thin, it should be noted that the band is fully aware of its limitations. They simply want to throw some curves into the game. “We’re not jumping from the Chick Corea Electric Band on one track, to Meshuggah on the next. We like people not knowing exactly what they’re going to get on the next track.”