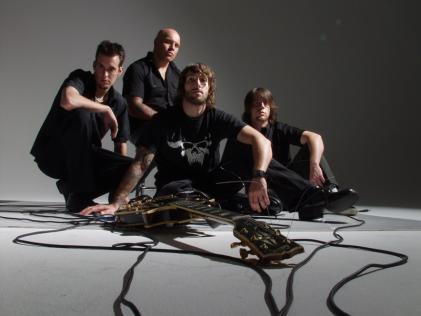 It was early 2002 when Josh Loucka and Matt Kane decided to put everything they owned into a van and head west, leaving behind the comforts of their hometown of New York City. With hopes of greener pastures in Los Angeles, the duo decided to take a large leap of faith while looking for a dramatic change of scenery. Giving up their overpriced NYC apartments was the easy part; starting from scratch in a new city far from home was a bit more daunting. “We basically came here with zero money,” says Josh, who was born and raised in Manhattan. “But we knew we needed to shake ourselves up regroup and re energize and get back to why we wanted to make music in the first place.”

Josh’s musical career started in high school when he formed Shift, a band that went on to become an influential part of New York’s post-hardcore scene, releasing two albums on indie label Equal Vision Records and then one for Columbia Records. After arriving in LA, he reconnected with another New York transplant and hardcore scene alum Gavin Van Vlack, the driving force behind seminal bands Burn, Absolution, and Die 116. Josh asked Gavin if he’d like to join Big Collapse. “We’d known each other for years in New York,” Gavin remembers. “Somehow it just made sense to team up in a new city.” Then a friend introduced them to Kyle Stevenson, a dynamic drummer who had spent time on the Ozzfest stage, playing in Flashpoint. “Kyle was the first drummer we tried out,” remembers Matt. We clicked right away and the line-up just sort of fell into place.”

Local and regional shows soon followed and the band started to garner a strong following, attracting the attention of up-and-coming Orange County-based label The Militia Group, who offered them a deal. The band promptly signed on the dotted line and headed into the studio with Ben Moore (Finch, Rocket From the Crypt, Noise Ratchet) to record Prototype – 10 songs that draw from the raw power of their punk rock roots, while delivering potent melodies that get lodged further into your head with every listen. The resulting sound eschews any easy classification, incorporating punk, 80s metal, emo and indie rock, but ending up somewhere near straight-up Rock & Roll.

With Prototype scheduled for an early October 2003 release, Big Collapse plan to get back in a van and take their show on the road in support of their new album. Call them what you want, just don’t underestimate the power of a good rock song. “We’ve been told we sound like a cross between Helmet and early Def Leppard,” says Josh. “And I think that’s just about the best compliment you could ever give us.”