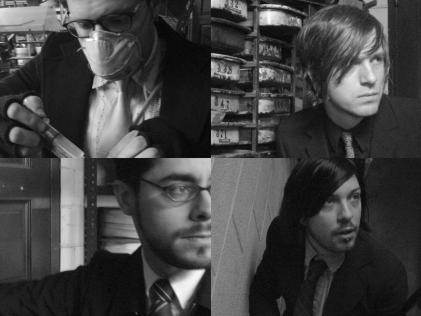 Having already exceeded the shelf-life of the average indie rock band by a few years, a series of tours, and a handful of albums, Brandtson could have used the departure of original bassist John Sayre as their moment to shake hands, congratulate each other on a race well run, and ride off into the Cleveland sunset with their reputation and legacy intact. But just as a brush with death can cause some people to live their lives with a newfound purpose, Brandtson found a new bassist, regrouped, and agreed to shake off all of the trappings of comfort and complacency that can cripple a band that has been writing songs together for eight years, creating their boldest, most immediate, and most dynamic album in the process. Welcome to Brandtson’s second act.

A song cycle built on the idea of confronting agents of manipulation from media, from social pressure, from personal fears and insecurities. Hello, Control is a statement of liberation and experimentation. On my end of things, songwriting has always been about coming up with interesting guitar parts and trying to piece a song together around it, says guitarist Matt Traxler, recalling a barroom band meeting that yielded the new direction for the band’s eighth album. The first thing that pulled me away from that mindset was “Paint It Black” by the Rolling Stones. I was just listening to it, and there is nothing going on in the song. There’s the sitar part that is really simple, drums, bass, guitars, whatever everything is just an afterthought, and it is the vocal melody that sucks you in. As I was explaining that, the Violent Femmes song Gone Daddy Gone came on the jukebox, and it’s a similar thing, where it’s just xylophone and the other instrumentation is on the back burner and the real hook is the vocal melody. I think we all realized that was something that we paid too little attention to in the past.

With the addition of bassist/electronic auteur Adam Boose (formerly of Cleveland synth standouts Furnace St.), Brandtson not only subverts the formula of past releases but obliterates it entirely. Bringing Adam into the mix, and him being from a background of electronic music really helped with that, says guitarist/vocalist Myk Porter, pulling no punches when describing the band’s eagerness to break down the previous structures of their sound. Before Adam joined the band, we were the same four guys for eight years, and you definitely get locked into a formula working with the same people for so long. The fact that a lot of the writing on this record was done in front of a laptop instead of in a room with four guys with guitars, you have a melody in your head and instead of plucking it out on a guitar you thump it out on a Moog, and that can put a new spin on things.

Sharpening their pointed pop hooks on Boose mastery of electronic programming, the band veers from mewing guitar lines and pulsing dance-rock hook of the apocalyptic Earthquake & Sharks to the twitchy shout-along anthem Denim Iniquity and the computerized croon of Nobody Dances Anymore. Arrangements are simplified to reinforce the primacy of the melody, with the previously cutting and slashing guitars now churning and twitching, with Jared Jolley complex rhythms forming complex patterns around Boose electronic blips and bloops. Add it up, and it’s a beguilingly original work, a sonic tableau where New Order and Depeche Mode wander onto the dance floor before being pushed to the sidelines by the sound of Franz Ferdinand bumping heads with Kraftwerk

Both a reintroduction and a statement of intent, Hello, Control is a moment of rebirth caught on record, a band reinventing themselves, reinvigorating their sound, and reaffirming the power of rock and roll. This is the sound of a band losing and finding themselves all at the same time. Brandtson is very much alive.