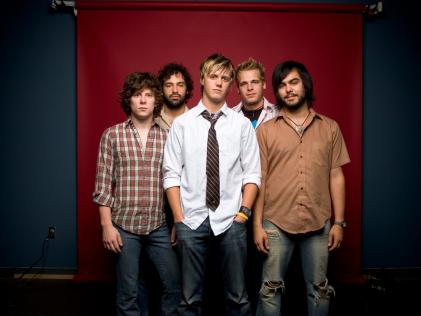 Cartel sees themselves as minstrels of their day, offering songs about life and love that have always captured the human soul. Issuing a challenge to their cohorts, Will Pugh calls out pop punk today isn’t going anywhere- let’s make some moves. With their new album “Chroma,” Cartel definitely makes some big moves in the right direction. Having toured across the US multiple times, with a widely enjoyed, self-released EP Cartel quickly garnered a devoted and noticeably growing fan base with a reputation for being one of the most fun, genuine, talented bands around. When Alternative Press compiled their 2005 list of “Bands You Need to Know,” you bet your boots that Cartel was on that list. The band’s “Ranson” EP was a hit with fans everywhere, and what the band has achieved with “Chroma” is the result of hard work, intuition, and great synergy between old friends. Cartel has only been a band for a few short years, but the band’s members have known each other for well over a decade. This record sounds like an inspired band who are unafraid to be inquisitive in their song craft and recording. It doesn’t stray far from their true sound, but at the very same time soars much higher and drags along with it noticeable influences from the band’s love for bands their parents listened to. In the song “Answer” Will Pugh found out where a lot of his inspiration came from and tips his hat to Brian Wilson. “Chroma” reflects the band’s ability and desire to write timeless songs with genuine subject matter and classic nature in the modern world of the benign and cold. The band attempts to take a step into the same ballpark as the staid records of their parent’s generation that inspire for generations to come. While “Chroma” is not a concept album, the album was built as a cohesive piece. Honestly, Settle Down, and If I Fail are specific examples among many of songs inspired by a common, fervent search for love and truth with beckoning lyrics and a pop tinge. Settle Down contains the darker undertones of the three, and the angst of young love with hope of lessons learned. It’s not so much pop punk anymore for the Atlanta boys, but more pop rock, now laden with more alt rock tinges and twists. Where bands in the sixties brought rock ‘n roll out of the drab singles format- Cartel has a new direction and vision for their music, bringing surprise and intrigue. “Chroma” offers plenty of surprises while remaining culturally relevant and fresh. Cartel has opened their minds to new musical possibilities that challenge their peers to achieve something more. The band brings the best of both worlds in accessibility and artistry. “Chroma” also reveals Will Pugh’s deep thoughts and philosophical questioning through bright melodies that stay in your head all day long. Their compelling guitar arrangements, driving drums, and youthful energy rival more seasoned artists and naturally invoke attention. Cartel mesh loud, bombastic guitars with pretty melodies and rock arrangements with an acute sense of pop songwriting. The band started out as a guilty pleasure for many- who are now demanding more and more. Their LP is evidence of a creative connection that transcends the band’s relatively short life.