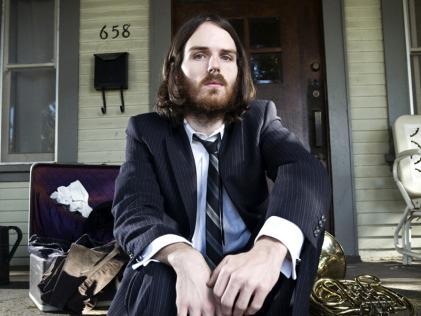 “My music is a fantasy that I live in”. This comes from a small-town dreamer, Chase Pagan, the author of Oh! Musica. Proudly hailing from Wynne, Arkansas, population 8,615, the soft-spoken Southerner has created an album that is both intimate and grandiose. “I wanted to do something more organic,” Pagan says of the forthcoming albumï¿½as Oh, Musica captures his true intentions. Carried by Paganï¿½s lilting falsetto and charismatic, sometimes fantastical songwriting, Oh, Musica is a debut of impressive scope. Whether itï¿½s the bouncy reincarnation romp ï¿½Waltzing in the Sky, ï¿½ the impassioned tango inside ï¿½Spanish Tongueï¿½, or the rich upright bass and crashing keys of closer ï¿½Violaï¿½ï¿½the realization of Paganï¿½s expansive ambitions is an enchanting one. His distinctively orchestral, vaudevillian styleï¿½paired with his natural, organic and unpretentious essence make for a pleasing catharsis. Musically, Paganï¿½s songs feature complex structural progressions over stripped-down instrumental processions: a wisp of guitar here, a few lines of piano there, all under his nearly limitless vocal range. Served by The Militia Groupï¿½s artist-friendly vibe, on his newest studio work, Oh Musicaï¿½the upcoming full-length, (set for Spring, 2007 release) Pagan brazenly marches forward through the boundaries of the genre, hopping from jazz to soul to country to rock, to tackle themes of mortality, life and love. “Itï¿½s writing about life and death, everything that happens in between, and everything you can hope for afterward.”Embracing the theatrical, he writhes and bleeds a florid combination of rock, soul and country on stage. A natural performer, Pagan pulls off impressive vocal gymnastics over a backdrop of keys, guitar and Mellotronï¿½and his endearing whistle, whenever he has a chance. Recorded during studio sessions with friend Jesse Cannon and others in Memphis and New York City, Oh! Music is the culmination of more than three years of touring, writing and personal musical reflection. His association with The Militia Group comes after recording an album with iconic producer Ross Robinson (The Cure, At The Drive-In). Pagan was lost in the shadows of a corporate takeover. “It was quite a strange experience.” With his music destined never to see the light of day, he walked away with the conviction to evade major label shortcomings, and record and release his music, his way. “Sometimes I’ll come up with a piano part and sit on it for months until another part comes along,” he says. “I like to leave it as being inspired, instead of taking some creative idea or impulse and forcing something technical out of it.” But at the end of the day, Paganï¿½s music is merely a twenty-something’s contemplative search for answers in a world that is rapidly changing. And now, on the verge of releasing his music to the world, Pagan takes comfort in his familyï¿½s small-town roots, knowing that his strength comes in remembering where he’s from and not where he’s going. You can find Chase appearing in theatres, barsï¿½even your neighborï¿½s living room very soon.