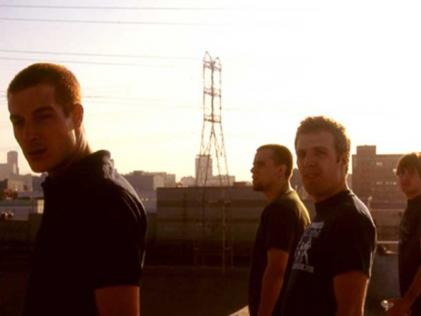 While lying on our backs in American cities, staring endlessly into skies sickened with a thick brown haze, we either calmly reflect in meditation, hoping for a connection to the pathways of understanding– or we lie there dizzied in disintegration and madness. The human mind becomes muddied by the pollution of money, concrete rendezvous and machines in the sky, but there’s a place in every city for some interjection. It’s carved into the sidewalks, splattered over bus bench advertisements, and seeping from the broken televisions, fallen from endless skyscrapers above. Recently, some ideas were documented which question the automation we accept and maintain- and our thoughtless movements to achieve and hoard. Max Hellmann and his comrade Johnny Collins happened upon a set of austere, black and white photographs that sent the two reeling into a terrifying, unbelievable adventure into the bowels of the metropolitan. Someone left these images behind for others to find, in order to reveal the hideous failings of humans, and the clockwork futility of what Max and Johnny would later name, the Automatic City. The documentations of the Automatic City were discovered in 2001, providing inspiration to Max and Johnny’s musical endeavors in their band, Controlling the Famous. The two found the photos with stark clues as to where more would be found. The clues included writings on the back, indicating which alley or street to brave in order to locate the next daunting image. Through this search, Max and Johnny were introduced to Brendan Hughes and Mike Schneider, and were intrigued by similar societal experiments taking place in Los Angeles. The men built a rapport, continued through LA in the piecing together and deciphering of the plotted photos, and later began playing music throughout the US as Controlling the Famous.

The first photograph was found smeared across the front window of the city’s largest modeling agency. Possibly the most arresting: an image of a beautiful little girl vomiting into the sewer. Next to her, money in a paper bag, and a portfolio of head-shots and magazine cover-esque dreams. An apparent vision of the things women are taught to believe about their place in the modern world. When the workers tore the photo from the front of the building, the four later found the image in the dumpster, where they followed the prompts on the reverse to where two more would be found.

The members of Controlling the Famous were lead by directives on the previous photos to the most desperate part of the city, where they found packs of wandering homeless at the stoop the city’s largest shopping mall. One of the vagrants handed Johnny a large folded photograph, and whispered, “someone told me you guys would come looking for this.” Upon opening it, they found that not only the images but the settings they were placed in both connected as an intended ensemble of gestures. This photo was one of an old man, carrying an obscenely large bottle of pharmaceuticals, wandering the halls of a psychiatric ward. With a maniacal smile on his face, the man stood against a white wall, facing a window to the outside world where flowers poured into the hospital. The man’s free hand was covering his eyes, lending the notion of being a captive to substance, unable to see the reality of what varying possibilities may loom outside one’s own addictions.

As directed by the backside of the previous psych patient’s picture, they were led to a downtown Los Angeles funeral parlor where, on the main marquee, was an image of a well-dressed businessman dumping money from a briefcase into a casket, in a forlorn attempt at reincarnating his dead lover. The image was a cryptic reminder of our mortality on this planet and the ephemeral aspects of money in comparison.

It all happened, not for the first time, but in the most perfect of places: the guts of America. The photos served as a map through the Automatic City, with indications of what even the most beautiful of cities contain: from the needle-armed transient, to the devil on a clear day, standing at the stoop of the US Bank Tower with his bags all packed, ready to jump into an inviting man���s dreams. This same scrim of true modern-society has subsequently been found in many major American cities since the first photos were found. These images are a letter to us all, with evocations like: Enervate all falsity from life. Dispose of the given and the arbitrary. Subversion allows for the ugliest as well as the most beautiful truths to show through.

Johnny Collins, Max Hellmann, Brendan Hughes, and Mike Schneider were an instrumental part of an uninterrupted, anonymous discourse about the Automatic City. Their findings (10 in number) now serve as a cacophony for all to take notice of, through the recordings of their post-rock group, Controlling the Famous.