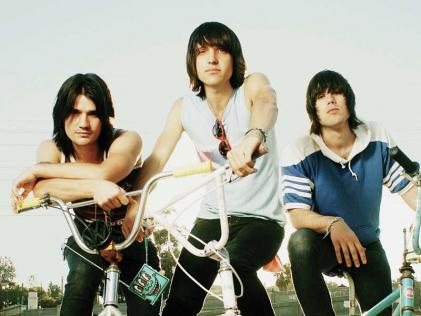 In the olden days, before pop was a dirty word, there were rock bands imitating the punchy soul of Motown and Stax, playing something that was bubblegum but still raw, pop music that was not too polished or too dumbed-down. Every generation since the birth of rock & roll has had bands in this tradition, on both sides of the Atlantic the Rascals, the Lovin Spoonful, the Jam, Elvis Costello, Squeeze but in the past decade or so, music in this vein has been conspicuously lacking. It disappeared perhaps because of the post-punk suspicion of anything too simple or too catchy–a puzzling attitude given that a central tenet of early punk was a return to the elementary songs of the fifties. Today, this seemingly extinct music is back, but it comes from the most unlikely of places. Who would expect that among the smog-fed palm trees and dingy, skateboarded sidewalks of L.A., there would emerge a band that could reinvent this tradition of raw pop music and northern soul?

Everybody Else, a trio named for a Kinks B-side, owe much to the harmonies and economical songwriting of the sixties, but they draw just as much on more modern music. Meat Market grooves like Outkast but has the screaming, bluesy vocals of Little Richard or the Animals. Say Goodbye combines an electro clash beat and new wave guitars with Elvis Costello-style lead vocals and a three part harmony reminiscent of the Beach Boys. The common thread is infuriatingly catchy songs and minimalist, dancey arrangements that sound both retro and modern at the same time. The lyrics are full of concrete images and are often more melancholy than the music they accompany. Over the fuzzed-out disco of In Memoriam are words about mourning the memories of lost love: I still see the blue, sunken barge/ down by the shore and I/ can taste the blackberry juice on our fingers/ But there’s an echo of careless, callow footsteps/ that run by so quickly. Listeners are left in that magical place where we don’t really know what we are feeling, but it’s giving us chills.

Carrick Moore Gerety and Mikey McCormack grew up in the snobbiest of East Coast indie rock circles, playing multiple instruments in bands with their older brothers from the age of four, and in Carrick’s case, also writing poetry and short stories. They met when each of them had just moved to California with a different band. Carrick (vocals/guitar) was in the Push Kings from Cambridge, MA, whose first seven inch bears liner notes from Steve Malkmus; Mikey (drums/vocals) was in an underground power-pop group called the Waking Hours who had been local heroes in Richmond, VA. Soon after The Push Kings played with the Waking Hours, Carrick and Mikey quit their bands and started playing together in Carrick’s garage with a rotating cast of friends on bass, until they literally bumped into Austin Williams, who had just moved from Fresno,CA, and now lived a few blocks away in Silverlake. Immediately, the three realized that in addition to their indie rock backgrounds, they share a love of old r&b and pop, but are more open minded than most music nerds. They scorn the idea that anything that is popular cannot be good, that modern music can never be as deep as it was in days gone by, and they adhere to only one orthodoxy: that a good song will transcend its genre, its time, its popularity.

In the short time since they formed, Everybody Else have collected an impressive grassroots following in America and overseas, have self-released an E.P. and single, and have just finished their debut album. With these recordings, Rick Parker (Black Rebel Motorcycle Club, Howl), has finally captured the spirit of their electrifying live show, marked by an energy that always seems to teeter on the edge of chaos without ever falling apart. Carrick’s alternately sugary and screaming current of a voice cuts through the sometimes raucous fray, while Mikey and Austin harmonize in the midst of Keith Moon-esque histrionics and giant bass riffs. As Mean Street wrote about their show a few months ago at the Henry Fonda in Los Angeles, “we found ourselves… singing Everybody Else songs for weeks after the show.” If you are one of the initiated, you know exactly what they are talking about. If you are not, you are missing one of most unique musical experiences of our time.
–Myles Sargent June 2006