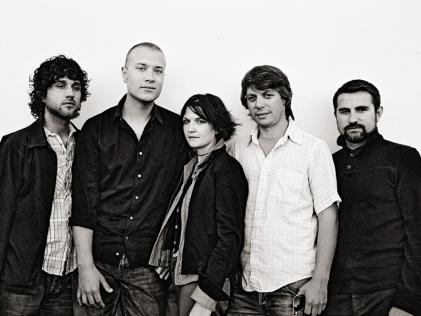 The Long Beach indie outfit fielding have been aptly named “The True American Heroes” by the press. For a band to be claimed as such, one would imagine these musicians have a good grasp on what American rock is all about- fashioning some shiny knowledge or “talent.” The truth is- fielding do well for themselves being musically honest and saturated with the feel of classic American music, the feel that comes not only from formal training or knowledge but an honest knack for the songwriting craft. Since 2004, the members of fielding have carved their own unique niche in the amply talented Southern California music scene. The group’s music marries traditional rock instrumentation with delicate layers of piano, organ, strings, and accordion (played by the band’s classically trained North Irish import, Beth.) The result is a distinctive sound inviting listeners to travel the spectrum between the bass-driven grooves of `90s Brit-pop and the timeless melodies of Middle-American acoustic ballads. With a wide palette of sounds and textures, their sound’s identity has an enticing mystique. Songs telling tales of Giants with weakening ankles by,” bastards who dwell low,” and ones that start out singing about cartwheels and campfires lead listeners in, only to tell them stories much more full of meaning than they may have anticipated. After playing together for nearly two years, fielding is set to release their first full-length record with Southern California indie label The Militia Group. Taking a decidedly independent approach, most of fielding’s self-titled album was independently written, produced and recorded by the band and friends in their drummer’s bedroom. The rest of the album was engineered & produced by Chris Fudrich (Nada Surf, Matthew Sweet, and more.)