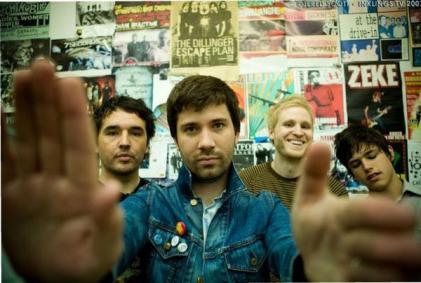 Seth Roberts and the members of the band Lakes have come together to create a hopeful set of songs that unabashedly shine as such, while still maintaining maturityalong with touches of time-tested realism. The debut EP for Lakes, entitled Photographs, harmonizes with lovely but bold vocals, intertwined with jangley-warm guitars, playful hints of banjos, and melodies that are at-times-reminiscent of The Police or Tom Petty. This first work captures qualitative reflections, revealing Roberts own acute sentiments and personal histories. The name alone is taken from the community where Roberts used to live, where his parents live, and where he and his wife were married. Photographs was also recorded there, where innumerable memories reside. This debut embraces romance, answered questions, and reveling in face of the strange state of things. Before Roberts found himself in the often-unyielding clutches of change, he had a love for his band; Watashi Wa. But things sometimes have their way of doing an about-face just when life is bourgeoning with youthful excitement. The band’s sound started evolving and developed into something that no longer fit their current label. They asked to be released from their contract; a decision based on musical differences and nothing more. The album, despite its change in direction, was released, entitled Eager Seas, announced as Watashi Wa’s final record, and preceded the break-up of Watashi Wa. Finding himself at an unavoidable crossroads, Roberts accepted an opportunity to tour the country as the stand-in guitarist for the rambunctious but much-adored pop-punk band MXPX for an entire year. Roberts recalls, At that time, I was torn from my best friend, lots of close friends, and things started to just fall away. Touring with MXPX couldnt have come at a more perfect timeI was able to get away and regroup. Just as Watashi Was end became increasingly imminent, Roberts began writing the song White Flag. He recalls, Since I was thirteen, I wanted to play music, and I did everything I could to make that happen. When my band fell apart, I felt as if I was fighting for all these big dreams I wanted to be like the bands I loved that changed things, changed music. In a sense, it was this or nothing. Fittingly, on White Flag, Roberts is accompanied by the singer of MXPX, Mike Herrera, singing I had to change the world, but my world came down tonight. I thought that I had to win the war, but Im so lost in the fightso Im letting this be. The song is a melodic reminder of unpredictable transitions that one wouldnt necessarily request, but that can surprisingly lead to fantastic junctures in life if embraced. Roberts, explaining the theme of Photographs shares that, a lot of the songs on Photographs are about my wife. In the changing times of my last band, I lost a lot of things that were very familiar. But now that things have settled more, and come to fruition I feel very blessed, lucky, and content. My wife and I were best friends for five years, we fell in love, and a lot of the songs on our EP have to do with that relationship and how it changed my life. There is also an underlying, touching story connecting the entire EP, of a couple, content in their old age, going through a photo album that takes them back in time. Roberts explains, my grandfather is the person talking at the beginning of the title track from the EP who was married to Roberts grandmother forty years and has inspired Roberts with such an example of unconditional love. In the midst of learning how to surrender notions of perfection, Roberts realized its not all in my control anyway. Just as that control is relinquished, Roberts admittedly states as painful as that can be things just start making more sense, and one feels much less numb to life. Back then, I had more of an idealist-type mindset, but my thinking became much more realisticbased on trials, figuring out myself, the world. I was realizing hard realities, I wanted passion againsomething to inspire. And Photographs does not stop short of inspiring. The listener is transported to a world populated with beautiful realism, touching recollections, and musical integrity so rarely found today. The passions that lie in the world are re-ignited through Roberts’ voice and Lakes EP.