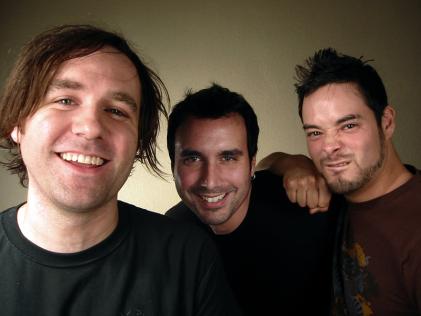 Hailing from the deserts of Tempe, AZ, where cacti run rampant and there?s sand everywhere underfoot, LET GO have been planning their emergence from the heat. Formed from the musical collision of members from The Stereo, Gloritone and Pollen, Let Go drinks from the same taps as Jimmy Eat World and The Format, but creates a sound all their own.

When vocalist/guitarist Jamie Woolford felt the need to augment his demos with some added muscle, Let Go was born with the addition of bassist Chris Serafini and drummer Scott Hessel. ?Let Go is the direct result of me pulling Jamie out of my “obi-wan-esque” hiatus from music to start a brand new band,? explained Chris, poking a hole in Jamie?s story. ?After I formed a solid rhythmic bond with Scott in Gloritone, it was a no-brainer to have him jump in with us and create this trio.?

With a handful of shows in their collective back pocket, Let Go has implemented an ingenious and non-confrontational touring band member: their iPod. ?We use the iPod for playback of keyboards, extra guitars and sound effects,? Jamie explains, clearing up the mystery of what makes their sound so big. With the left channel serving as a click-track for the drums and the right channel serving as a sequencer for the sound system, the iPod keeps all three in sync with each other. ?To its credit,? Jamie continues, ?using the iPod seems to have actually drawn more attention to the band than had we done without it. It?s funny what people choose to regard as important.?

Sweating roughly a month?s worth of perspiration holed up in Jamie?s home studio, Let Go recorded and fine-tuned their album together. Being the visionary that he has always been, Jamie describes their democratic songwriting process in saying, ?I?ll come with the basic parts and melodies and show them to the guys. Then we jam it out until it gets formed into a finished song. To a certain degree, we just play and let fate intervene.?

Since a majority of the songs had been floating around Jamie?s studio in differing states of completion, the band spent a good deal of the time tracking, firming up certain passages, and sometimes rewriting. But what they?ve ended up with is an impressive collection of tight and powerful rock songs that deliver shark-sized hooks inside refreshing lyrical content. Let Go aims slightly askew of the typical love song and, instead of going head-on with something typical, finds the side route into a story. In one case, Jamie lets two songs share the same lyrics to tell a story from four different points of view. Chris jokes, ?It?s like a drug record without the drugs.? Themes of love and disappointment also surface, as well as certain ponderings about life?s purpose. Jamie comments, ?Sometimes I wonder if the difference between truly living life and just coasting by is only a matter of point-of-view.? After punching out the song ?Paper Cuts? to give the album one last straightforward rocker, Let Go spent a week mixing and sent the songs out to get mastered.

With their debut album at hand and their future in front of them, Let Go are set to take on the music world. The verdict is in: Let Go seriously rules!