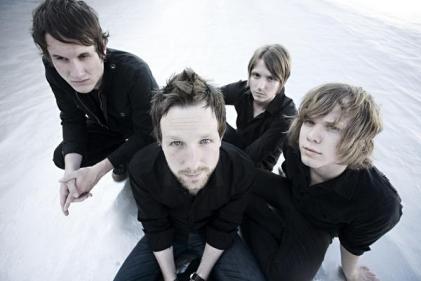 Lovedrug are back, and they brought their guitars and a few cross words with them. Recorded with Michael Beinhorn (Soundgarden, Red Hot Chili Peppers, Mew), Lovedrugs The Sucker Punch Show is every bit the sonic leap forward one would hope for from these arena-leaning indie rockers. Recorded at the $5.5M Red Bull Studios in Santa Monica, Sucker Punch delivers in spades on the big-budget hints inherent in much of the bands previous work, providing gigantic tones that span from new heavy rockers to atmospheric art for which the band is known. This is the next generation of Lovedrug; a neo-melodic-grudge set with twice the mood and ten times the menace. Just hanging around, just waiting to die, Were all suckers in the same damn sucker punch show As the above line from lead single Everyone Needs A Halo suggests, Michael Shepard & Co. have a definitive outlook on this the third Lovedrug effort. Everyone has a role in the sucker punch show, this is just my accounting of it, states Shepard. For me, my road, I’m just caring less and less about self screening and caring more and more about letting people know exactly how I feel. Thus opening track Let It All Out is both warning and manifesto an admonition of uninhibited statements to follow. Sucker Punch is about letting go of inhibitions and not allowing your brain to filter the emotions that come naturally, says bassist Thomas Bragg. Sometimes you gotta let it all out The resulting Sucker Punch Show sees Lovedrug at their aggressive best, both in terms of content and musicality. Halo hits with the ill-tempered fury of a wild animal with a toothache and The Dirtiest Queen provides perhaps the darkest brooding in the Lovedrug catalog to date. While songs like Only One and Broken Home deliver Lovedrugs brand of pop-rock with an edge, tracks such as Blood Like and Dying Days push to new heights the spacious rhythms and aching vocals that so many have come to love about the band. Now stare at the ocean while your friends all drown We all need to learn to swim With The Sucker Punch Show set for release in North America on October 28th, Lovedrug are now wholly focused on the live shows to come. According to drummer James Childress, we conceptualized, wrote and recorded this album from start to finish with the working idea that we would be able to recreate the songs live. Guitarist Jeremy Gifford agrees. I cant wait to play these songs live its going to be a true rock experience just four guys bringing their emotions to the table and letting them spill out all over the audience.”