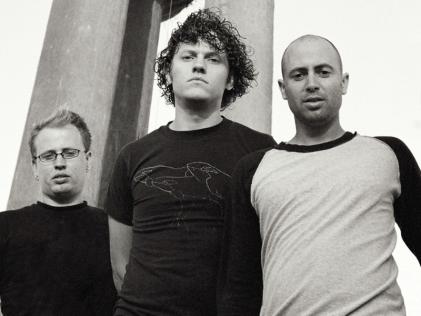 As soon as Man Alive formed, they had the cards stacked heavily against them. Man Alive started in 1999 in Jerusalem, Israel, of all places. Jamie Hilsden (Vocals/Guitar) Jon Shkedi (Bass, Vocals) and David Shkedi (Guitar) started playing anywhere that Jerusalem would have them, including parties, local clubs, house shows, etc. The crowds in Israel quickly grew and embraced their punk-driven rock sound, and Man Alive became one of the biggest draws in the Israeli underground music scene. Before long, Man Alive knew their music could reach the rest of the world. Shortly, after recording their first demo in 2000, Man Alive received significant industry interest in the U.S. The most interested parties ultimately dismissed the band as “not available to tour”, or “too much of a financial liability” due to their roots in Israel. Geography, it seemed, was not on their side. Despite these hurdles, Man Alive went on to release two full-length albums with their own money and created a fan base that stretches from Israel, to Japan, Europe and North America. Man Alive has played over 200 shows since 2003, most of which were in North America, and have traveled to over 40 states and provinces in Canada. In the summer of 2004, Man Alive decided it was time to take their newest material into the studio. Enter famed producer Ed Rose (The Get Up Kids, Motion City Soundtrack, Etc.). Ed stepped up to the plate to produce and record their new album for a fee the Man Alive boys couldn’t turn down. So, at the end of their 2004 summer tour they scrounged together every shekel they could (much of it “borrowed” from family and friends) and stepped into Blacklodge Recording Studios to create their first professionally recorded and produced album. “Open Surgery” shows how nicely Man Alive’s sound has matured since the old days, while maintaining the energy and shout-along spirit of their punk roots. One listen to “Open Surgery” will take the listener from a hook-driven pop song (Say What You Want), to a punk rock anthem, complete with classic Good Riddance-style choruses (Catch Phrases, Slogans and Chants.) Now, with “Open Surgery” finally in stores across North America and multiple tours on the way, Man Alive will silence the naysayers once and for all.