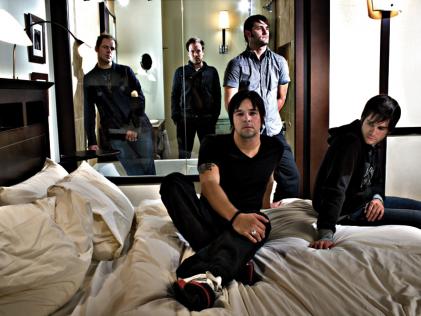 Just as news of Montreal’s erupting music underground began to reach international ears, five young Montreal musicians did the unthinkable: They moved to Toronto. Out of step with the common thinking, for sure, but Mobile have never been common thinkers. Where most other bands are chafing at the stage, blinding visions of performing glory burning holes in their souls, Mobile spent three long, patient years in their isolated Montreal studio rehearsing, never venturing past the membrane of their common chrysalis until they were absolutely and utterly certain that they were wholly formed. Says singer Mat: We were frequently disappointed by live local bands who weren’t prepared to do a real show. We wanted to be seen as a great band, a strong band. Our song-writing wasn’t as strong as it is now, but we were really focused. After all… rehearsing four times a week for three years can only help. Three years in a milieu where three minutes generally tests the outside limits of endurance. As you might expect, they didn’t emerge so much as explode.