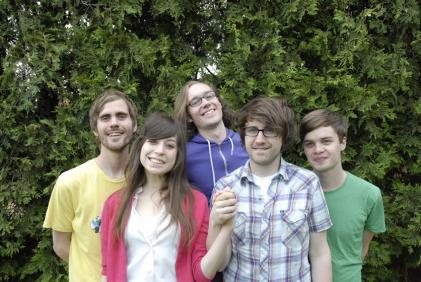 Its not every day that a beach record is birthed on the tundra. One for the Team’s sophomore release, ‘Build It Up,’ is a record chock full of loud, sunny, sparkling, pop-gems of an alarmingly contagious magnitude with constant dueling male/female vocals and enough harmonies to melt the icicles from the Minnesota winter that created it.
While the record was written by Ian Anderson quietly on an acoustic guitar in his bedroom, it was assembled and shaped by a group of friends who took what once was introverted, gentle songs, to the extroverted, poppers that they now are.

However, the lighthearted exuberance felt on ‘Build it Up’ did not happen overnight. For years, Anderson worked in the shadows, running seemingly endless musical projects from behind the curtain. From starting the tremendously successful Afternoon Records, a publicity firm, a popular music blog all while maintaining his position as patriarch of the youthful Minneapolis music scene, Anderson spent a long time out of the spotlight prior to this release.

One for the Team’s first album, Good Boys Don’t Make Noise, was written, performed, and recorded almost entirely by Anderson in the midst of this hubbub. It was a lonesome process of late night weekends involving only a basement, a computer, and perhaps Star Wars playing on mute on a television nearby.

So it may come as somewhat of a surprise to see Anderson letting go of the reins, stepping out from behind the curtain, and embracing the lights head-on. Along with lead singer and keyboard player Grace Fiddler, drummer Elliot Manthey, bassist John Krueger, and lead guitarist Bill Caperton, One for the Team are ready to step out together with their new record, having found a happy vehicle to do so in Long Beach, California record label The Militia Group.

Its not easy to concede control for someone like Anderson, who is accustomed to steering the whole ship. But then, maybe that’s a lot of what this record is about: growing up, letting go, getting let down, learning from your losses, being happy just to be here with the people you love and admire. That’s all here. And its all been done.

But what’s different about One for the Team is the way in which they refuse to wallow in their own small private miseries. They would rather blast an enormous ray of sunshine into dark closets, crush the doors down with unruly guitar crunch, and throw a wicked picnic with all their friends afterward. This record and this band want to bring the party to your house. They want you to step out of whatever shadows you’re hiding in, sing tunes, smash guitars, bang on drums, and let it all go.

This band isn’t about a posture of cool or seeking credibility through meaningless weirdness. They are taking the music that has always brought them joy and imbuing them with the unique vision that comes from living in the snow for most of the year. Get out your balaclavas and your speedos because One for the Team has been partying since yesterday.