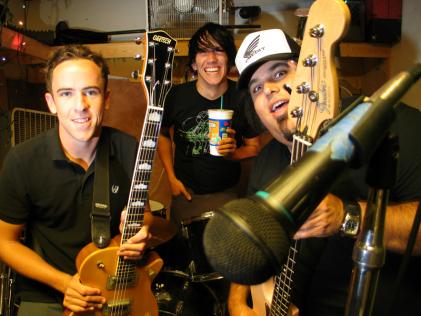 For many bands, five years seems like an eternity. Within a five-year timespan, a band can theoretically formulate material, create a demo, sign to an indie label, release an album, tour the nation, sign to a major label, release another album, wait for it to flop and have their entire career unravel right before their very own eyes. Hey, it’s even been done in four before. But for Sean O’Donnell of San Diego based Reeve Oliver, it took five years to barely get his project off the ground and create a properly-released album. And it’s not because Sean, a prolific songwriter who had established himself through previous efforts, was resting on his laurels.

It is, however, due to his careful and considerate planning, meticulous ear for crafting the superb pop rock hit and skills as an engineer and producer, that his five years has been time considerably well spent. And if slow and steady wins the race, you might as well finger Sean and his band Reeve Oliver as the ultimate victors.

Reeve Oliver began as a pipedream solo project for Sean in 1999, who used the moniker as an outlet for a batch of songs he had assembled which didn’t necessarily fit the traditional mold cast for the other projects he’d been involved in.

“I had to start over,” he notes. “It was definitely like a big, big change.”

After performing on the local scene with a cast of musician friends for a few years, Sean, who moonlights at the San Diego amusement park Sea World as a pre-show entertainer (The Dolphin Show), singing to thousands of park guests everyday, made Reeve Oliver his main priority in 2002. It was then he joined forces with novice drummer and fellow Sea World entertainer Brad (The Sea Lion and Otter Show) and later enlisted the talents of veteran punk and Fluf frontman O. on bass.

“That for me was the real birth of the band as an actual working group,” Sean says. ” It wasn’t something in my bedroom anymore.”

“Fluf and Reeve Oliver used to rehearse at the same rehearsal studio,” notes O. “They hadn’t seen their bass player for a while and I really liked these guys. I told Sean, “Hey if you need a bass player, I’d love to play.” So, I learned all the songs in a day and played the show later that night.” Even though O. is several years Sean and Brad’s senior, he says that “those guys have a hard time keeping up with me!”

The trio quickly gained momentum through O.’s established connections in the scene and industry, and Sean began assembling a CD of demos he had been working on, titled the Reeveolution EP, which was partially released through clothing company Redsand. Ironically, the 6-song EP took top honors as Best Rock Album at the San Diego Music Awards in October 2003, but it wasn’t an album nor was it an officially-released disc. Not a bad start at all, and Reeve Oliver certainly weren’t complaining. “I was kinda blown away cause it was a six-song demo and we beat out a Rocket From The Crypt album,” he notes. “Something?s wrong here. We went up to accept the award and I said, “Thanks a lot, but I wanted to let you guys know that we didn’t actually put out an album.”

Upon the release of Reevolution, Reeve Oliver hit the stages of the Warped Tour in 2003 to largely receptive audiences. That tour was followed by a stint with Yellowcard, which found the act gaining support well outside their region, largely due to the word of mouth spread by their more popular peers.

“Ryan from Yellowcard goes out of his way to tell people about our band,” Sean says. “Another band is Switchfoot, and I heard about them being on the radio or at the MTV Beach House saying that they’re listening to our band. It’s really cool because they don’t have to do that.”

The tour also found the band’s self-dubbed “secret weapon,” Brad and his blazing skills and antics behind the kit, whom O. calls “amazingly entertaining and the silliest thing ever.”

Using his relationship with The Militia Group, which stems several years before the label existed, Sean signed on with the label this year and immediately got to work on the band’s debut full-length.

“I produced it completely myself, which I do not recommend,” Sean says. “It was just a lot of work. I had to make a lot of crucial decisions which really ended up stressing me out.” But the stress has paid off into a picture-perfect power-pop disc, accurately reflecting Sean’s compositions, which are inspired by artists like Dinosaur Jr. and The Lemonheads. Sonically finessed via the mixing efforts of San Diego native and indie rock studio veteran Mark Trombino (Rocket From The Crypt, Blink-182, Jimmy Eat World), Reeve Oliver’s debut was ably placed into good hands for a final touch.

“I really see this as our first album, it’s our first CD,” Sean affirms. “Everything else I’ve done is just me gearing up for this. I want this to come out right. I spent five years working on it and I’m not going to let it go now.”