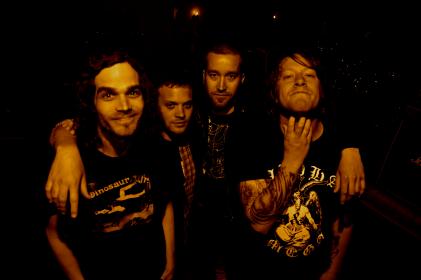 Sights & Sounds is vocalist/guitarist Andrew Neufeld, drummer Joel Neufeld, bassist Matt Howes, and guitarist Adrian Mottram. This eclectic and experienced group of musicians first came together on New Years Eve 2006 and had an instant musical rapport. Following the release of their self-titled EP in 2007, Sights & Sounds took their invigorating live show on the road, sharing the stage with many acts including Silverstein, Only Crime, Cancer Bats and Boys Night Out. The debut full length album from Sights & Sounds will be released on May 26th, 2009 through Smallman Records. Produced by Devin Townsend (Darkest Hour, Misery Signals, Bleeding Through), Monolith is a collection of intricate songs that straddles the line between sonically massive and a beautiful experiment in textured sounds. The result is an exceptional album full of post-hardcore and punk influences, placed seamlessly over hints of far-eastern melodies – creating songs that are as aggressive as they are imaginative. Citing bands such as Mew, The Police, Sigur Ros and Lifetime as influences, Sights & Sounds is able to create something that is as much music as it an incendiary celebration of life and friendship. The inspiration for the songs comes from life experience, current events, literature, poems and from reflections on the human condition, explains Adrian, who adds The other guys in the band bring so many different creative elements to the table that the energy around us when we are together is both towering and vast. Featuring members of notable bands such as Comeback Kid, Sick City and Figure Four, Sights & Sounds is comprised of a unique and talented group of musicians with a collective knack for creating music that is refreshing and interesting. Their acute dedication and musical capability is evident both in their live show and on Monolith, and these qualities are bringing Sights & Sounds to the attention of audiences worldwide. Sights & Sounds will celebrate the release of Monolith by appearing on THE WEIGHT OF THE WORLD TOUR with Misery Signals, Haste the Day, Dead and Divine and Architects, May 19 June 20, 2009. They will continue to tour throughout North America in the summer, moving towards Europe and Australia in the fall months. BAND MEMBERS Andrew Neufeld – Vocals, Guitar Adrian Mottram – Guitar Matthew Vincent Howes – Bass Joel Neufeld – Drums