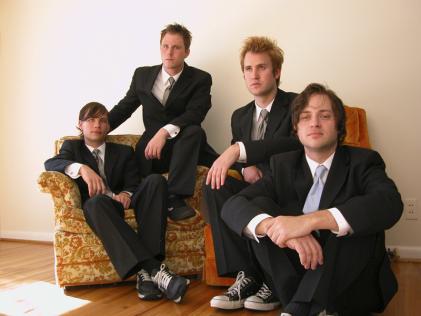 No, we didn’t graduate in 1998. The name The Class of 98 is really more about coming of age and growing. It’s about getting out of your comfort zone to realize just what you’re put here for. It’s about taking risks while not taking yourself too seriously. In 1998, class president and brainchild of the band Steve Wilson made a conscious decision to pursue music full time. So Steve moved to Nashville, built a studio, and started writing and recording. Over the last year, he met Nick, Ben and Colby, who all moved to Nashville for the same reason: a love of music. Since it’s inception in 2004, The Class of 98 has been playing anywhere anyone will listen, including clubs, youth organizations and high school assemblies. Nick states with a grin , We have been called the loudest band in Nashville. And now the band will release their national debut “Touch This and Die” January 24th, 2006 through The Militia Group. Nick continues, The Militia Group was the first label that really understood what we were doing musically. They were as excited about the music as we were. So the band headed into Steve’s Flickerlight Recording Company and recorded the CD, “Touch This And Die” in under 3 weeks. When asked about the title of the album, Steve states, We liked the feel of the name Touch This and Die, it sounds like something written on the outside of a 7th grade notebook. The main focus with the band is to have fun, and to not take things too seriously. I think Touch This and Die gets that point across. Now, preparing for the debut, The Class of 98 is doing what they always have, constantly playing shows and building their friendships with kids across the country. The Class of 98 make a focused effort to let their fans know that they genuinely care about them, and appreciate their support. Nick continues, “The most fun we have is hanging out with the kids, and that’s really what this band is all about.” “We really have success already,” Ben states. “We are a real band on a real great label and our job is to make music. But in no way are we ready to stop and be satisfied.” Colby continues, “Making money is cool, but right now, enjoying what we do is more important. This is one of the few jobs you can really enjoy. It’s rare to have a job where every day you wake up happy, ready to go to work.” Ben adds sarcastically with a huge smile, “I just want to stop working for The Man.”