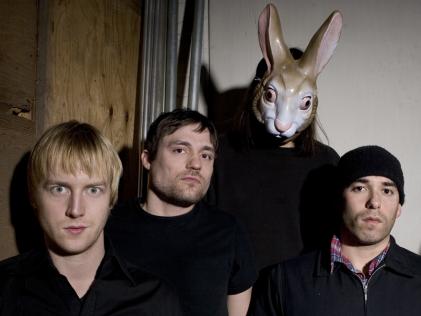 Sean Hoen, Nick Marko, and Nathan Miller of the yet-to-be-formed band, The Holy Fire, were all separately seeking solace from the uninspired, slowly dying-off garage rock scene of Detroit in 2004. Spending years contemplating The Pixies and Husker Du in late night Detroit dive bars, Nick and Sean found a sort of telepathic artistic connection in Nathan Miller, who also played with Sean in the fiery and insane Thoughts of Ionesco. The Holy Fire shouldered an intuitive, natural progression before the band even had a name.

Spinning off from previous artistic ventures, The Holy Fire finally realized their collective conviction to create something vital, with the creation of a stellar EP in 2004. Recorded in Toronto, the songs were originally released as a self-titled EP (2004/Down Peninsula Audio) that included the plodding and punchy “Lift Off Message” and five other gritty blasts of Afghan Whigs-meets-the Replacements-meets-My Bloody Valentine-influenced noise. Down Peninsula Audio reissued the EP with new artwork on May 10, 2005.

In 2006, The Holy Fire joined The Militia Group roster, with future plans to add a full-length to their catalog of recordings– which now consists of two rousing EPs. The Holy Fire’s latest, and overwhelmingly unopposed EP In the Name of the World will be nationally released on February 21st via The Militia Group. In the Name of the World was produced by Flaming Lips bassist Michael Ivins.

Frontman Sean Hoen describes the band’s chemistry by saying,”Nick gives everything a primal, very physical sort of passion. He plays hard even when he is sitting back and also has a really good sense of creating things out of improvisations; he’s a very emotional drummer. I think I bring the imagery and hooks and structural bases of the songs as well as a taste of paranoia. Nathan is kind of the sonic and emotional glue.”

The Holy Fire have recently toured with The Constantines, and have also played with fellow enigmatic indie rockers Mclusky and TV On The Radio.