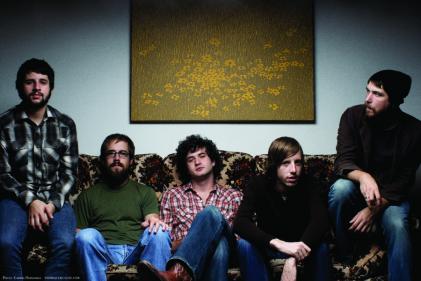 “The New Frontiers might surprise you with music that’s sincere and wise beyond its years. (4 out of 5)” – Paste Magazine

“The debut album by this Texas quintet is a calm pleasure. There is nothing extravagant in the simple piano- and guitar-led songs herein, just understated but satisfying melodies wrapped up in a mature songcraft. Never resorting to melodrama or grandiosity, The New Frontiers have instead created an album that engages without gimmick or shtick. Just good songs.” – Under The Radar Magazine

“Overall, I can say with a clear head that with Mending, The New Frontiers have probably created one of the best albums I have heard in the last few years. (9.4 out of 10)” – AbsolutePunk.net

“If you like your indie rock more on the accessible side than the arty side, than The New Frontiers’ Mending is one you should really pick up. It stays grounded with a plethora of solid melody and stays on the edge of being epic without ever going overboard. This is a band that does not depend on volume, but uses every instrument to maximum effect. I count myself lucky to have stumbled upon this one.” – Yahoo! Music

“Listen to Mending by the The New Frontiers in the dark, with candles lit. Your breath will catch in your throat. Tears may come to your eyes. And I swear on a stack of Beatles albums, you’ll feel what it’s like to fly…this is the best fucking album to come out so far this year.” – Popwreck

“With memorable songs and honest lyrics, The New Frontiers have given us an inspirational and unforgettable album with Mending. Get ready to wear out your CD player or iPod, you won’t want to listen to anything else for a while. (5 out of 5)” – IndieUprising.net

“The truth of the matter is that The New Frontiers is exactly what today’s music scene needs more of. (9 out of 10)” – SkylinePress.net

“The strength in The New Frontiers approach is that they don’t try too hard. This is no-quirks, unpretentious songwriting that focuses fully on the integrity of the song…this is a frighteningly mature album from such a young band. Absolutely top-notch material.” – Captain Obvious

“There isn’t a song on this album that didn’t hold me captivated from the first note. If you’re always looking for the next ‘new thing,’ The New Frontiers and Mending is definitely IT. (5 out of 5)” – Tune Review

“The band’s Mending is an affair that takes quiet truths and findings seriously and with every ounce of wonderment they can muster.” – Daytrotter.com

“As melancholy but oddly appealing as a middle-American version of post-Coldplay U.K. mope-pop acts like Keane or Doves, The New Frontiers’ musical focus throughout Mending is on pretty, melodic, low-key songs with just a hint of a country influence in the occasional fiddle or pedal steel part. ” – AllMusicGuide.com

“The band present powerful tunes with a quiet sense of modesty that doesn’t prepare you for its hefty punch.” – New-Noise.net

“The debut album Mending of The New Frontiers is one of those that you think, “this can’t be their first release.” This is alt-country flavored indie pop/rock with great vocals and harmonies.” – Planet Weekly

“Musical is the best word to describe Mending, the array of beauty and ambiance is maintained in the life of the songs and the pop element to entrance any individual. One of the best indie pop records to come out in the last few years. (4 out of 5)” – Melodic.net

“(Mending) sounds as friendly and gentle as the guys in the band are.” – Guidelive.com

“They caught my ear a while back with their gorgeous song “Mirrors,” and I was relieved that I enjoyed the rest of new album Mending just as much.” – Quick DFW

“…music that flows effortlessly and manages to find that perfect combination of gentle and smooth without lulling you to sleep. (A-)” – PlugInMusic.com

“If you’re for looking an album for a nice relaxing evening at home, then turn down the lights, close your eyes and let the somber melodies drift into your dreams.” – Soundcheck Magazine

“The overall experience is unforgettable like it should be. The New Frontiers have accomplished, in their first attempt, what most bands spend their careers trying to achieve. (5 out of 5)” – TheAlbumProject.net

“The New Frontiers have released an incredibly impressive album in Mending; being at times equally soft-spoken and just rough enough to not elicit any wussy claims. (4 out of 5)” – ForTheSound.com

“The New Frontiers are off to a great start, as there isn’t a dull moment to be found on their debut album.” – CosmosGaming.com

“The vocals, the instrumentals, the lyrics; I want to rave about it all. So…shhhhh – just listen.” – WhoKilledTheMixtape.blogspot.com