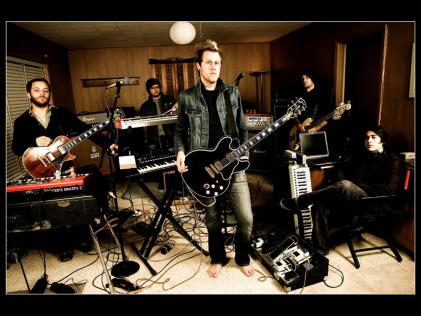 Out of the strange swirls and chill of Texas, a scrim of what was to come of the next three years for Colton Holliday and his close friends was created. This eventual backdrop of aural textures enhanced by a wall of sound and energy is now named The Panic Division.

San Antonio’s The Panic Division posses innate pop instincts that are complimented by the presence of electronic loops and keyboard sampling. Their sound has been defined as “Rock music that brings an electronic vibe to dark, pop-sensible songs.” They have the ability to bring a human touch to a style that tends to sound decidedly mechanical. Singer/Guitarist Colton Holliday elaborates on their songwriting process, “We write whole songs off of one electronic loop that we created ourselves, and one small sample sometimes spawns a whole song for us.”

Starting out being mainly as an instrumental band gave The Panic Division the platform to mold their sound into something fresh and different while at the same time, producing a sound that blends different styles from bands who inspire them. Colton adds, “We’re into all types of music, and some of us listen to more electronic than rock.

I grew up loving artists like Aphex Twin and Dj Shadow, but then I would go right back to Snapcase. I think our influences definitely show in our music. We love electronic and rock, and try to find a way to combine those two worlds in the right way.”

The Panic Division are no strangers to the challenges and triumphs of building a musical career. The band had long outgrown their state wide popularity and adoration by the time the ink dried on their contract from The Militia Group. The Panic Division became increasingly more popular after multiple successful tours and being a promotional machine for themselves.

Overcoming the daunting reality that bands in the San Antonio scene just don’t survive, The Panic Division turned down the empty allure from major labels to be on an independent label and make strides to success. Colton Holliday comments on the band’s growth, “It was very strange to me the day I started noticing that people I had never seen knew me by name and we knew then that it was time for us to take the next step in our career. We realized it’s so important to take a closer look at music and The Militia Group understood where we are coming from artistically. We’re stoked about being in the Militia family and cant wait to progress in the industry.”