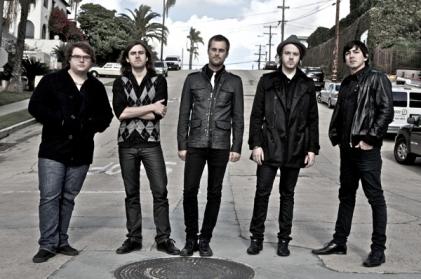 It is not uncommon to find that the greatest heroes have been tried by fire, the best songs are written from a place of despair, and the finest stories are wrought from tribulation. For San Diego, CA, based We Shot The Moon, this is exactly the case. Although heartache and disappointment led to the bands inception, it was a rebirth that left them poised on the brink of greatness.
You gotta pull yourself back together, give it one more shot. Its now or neverJust tell me Im strong enough for one more song. These were the thoughts running through the mind of Jonathan Jones on that summer night. As frontman for the band, Waking Ashland, Jones had seen and done it all. Waking Ashland had toured the world, recorded multiple albums, and experienced critical success. At the height of their career, however, Waking Ashland disbanded due to musical differences and Jones was left to pick up the pieces. With his hopes of stardom now long gone, Jonathan returned home to San Diego and landed a regular job. But Jonathan quickly found that he was unfulfilled with this life. He had to write music, it was in his blood. So, in the quiet of his bedroom by the sea, Jonathan began to write. The music and melodies poured out of him with an amazing ease, and the songs that emerged were beautiful and brilliant, full of life, honest despair, and hope for the future. With a few songs in hand, Jon enlisted the help of friends Dan Koch and Joe Greenetz of Sherwood (Myspace Records), and they began to write and record; thus, We Shot The Moon was formed.

Jones entered the studio with his Sherwood companions, and teamed up with producer Michael Rosas (Satisfaction, Sherwood). They recorded Fear and Love in two weeks, the end result being an amalgamation of the beach rock sounds that Jonathan grew up with (Weezer, Switchfoot) and the modern pop vibes of Sherwood and Hellogoodbye.

From the onset, Fear and Love, promises to be an instant pop classic. Beginning with The Waters Edge, the feel is instantly snappy and upbeat, with undeniable pop hooks and melodies that digest instantly and leave you feeling satisfied. Sway Your Head and LTFP soar with exuberance and honesty, setting a pace for an album filled with BIG songs. Tracks like Hope and In The Blue are more subtle, with introspective lyrics and a certain thoughtfulness that make for a well-rounded and stunning album. Jonathans personal struggle with the demise of his previous efforts are evident in the lyrics, but his hopeful view of the future shines through. Its clear that these songs were the start of a rebirth for Jones; a new start, a wonderful future to be written. Simply put, these songs were the best hed ever written.

With Fear and Love set for U.S. release on April 29, 2008, via The Militia Group, it is clear that Jonathans dedication has paid off.